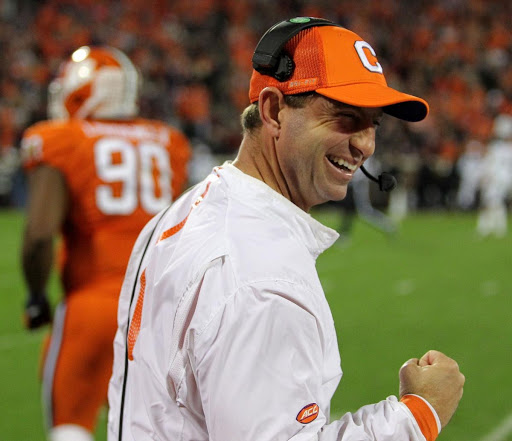 Recently Clemson Head FB Coach, Dabo Swinney took exception to a text he received at home from  a reporter regarding his star, sophomore QB, Trevor Lawrence.  While it hasn’t been confirmed a report circulated the day before that Lawrence had undergone an MRI for a bruised shoulder in the Texas A&M game.  According to Greenville News reporter Scott Keepfer, Coach Swinney was having none of it:

“I don’t like people trying to create drama,” the Clemson coach said Wednesday evening.  “There’s no drama on this team, so what do people want to do?  They want to create drama.”

Swinney would not confirm the MRI report.  “No, I’m not confirming any of that and I don’t want anybody texting me anymore—If I want anybody to know our medical stuff, I’ll tell you.  We will put it in an injury report.”  Swinney continued:  “If we did an MRI or we didn’t, that’s nobody’s business.  We do MRI’s all the time.  All the time.  A guy gets a bruise on his knee, we do an MRI.  A guy bruises his elbow, we do an MRI.  It drives me crazy.  There’s no drama on our team, so we just want to create some drama.”

Easy Gamecock and Georgia fans this is not a Clemson apologetics article.  Set your rivalry, or any feelings you may have about Coach Swinney aside and take a constructive look at what happened.  Whether it’s part gamesmanship, or not, Dabo was making a point and contrary to the story it wasn’t being made to the media.  Dabo was making a point for his players and team.

Great leaders don’t tolerate drama.  They create winning cultures and if it can’t be corrected they will extract high drama people from their team and culture.  Coach Swinney was sending a message to every single player on his team in that media report.  It was two-fold: 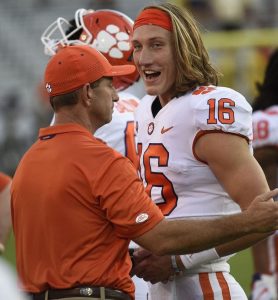 Imagine playing for a high profile, winning coach who just told the media to get back and keep their hands off the culture.  Every player on that team knew Swinney was making a statement about standing in the gap for them and what the Clemson FB culture is all about.

Drama impedes winning.  Drama rob’s great teams and companies of titles.  Even the slightest bit of it can infect every level of an organization.

Too many great companies, or teams have been left on the side of the road due to drama.  Former college coach and two-time Superbowl champ, Coach Bill Curry put it this way:  “There is a fellowship of the miserable.  I love them, but I avoid them.”

How’s the culture at your place, or on your team?  Is their drama?  Is it being dealt with by leadership, or ignored because the source of the drama is external, a high performer, star, or a perceived “favorite”?

Leaders set the pace.  If they tolerate drama it will come home to roost.  Players and employees know if their leader is a stand up woman, or man.  Most of us are willing to bust our butt if we know leadership has our back.  Leaders, take a cue from Coach Swinney and learn this lesson of leadership early.  You can still cheer for your team and appreciate leadership even if it comes from a rival coach, or company.  Leaders learn.